The Reality of a Home Hit By an SUV!

September 5 - October 4, 2021
Cameron - Tombstone, Arizona
Following a surprisingly good night's sleep we are up and on the road early Sunday morning. Even though we've both shared the "what-ifs" of the SUV crashing into our little Tombstone house, we've yet to be angry about it. Accidents happen, no one was injured, the house remains live-in-able, we have insurance as does the driver.
Bummed we're going to miss our Colorado route, and for the fourth time (!) we aren't going to see the eastside of the Grand Canyon. I really need to stop putting that on the map :-) However, we do target Cameron, Arizona (the place we would have used for that Grand Canyon visit) as our overnight stop on what is now a two-day trip.
Definitely more driving than usual, but Moab and Monument Valley give us lots to appreciate on what is a fairly clear day. I still can't believe the smoke continues to faintly mute our western skies. 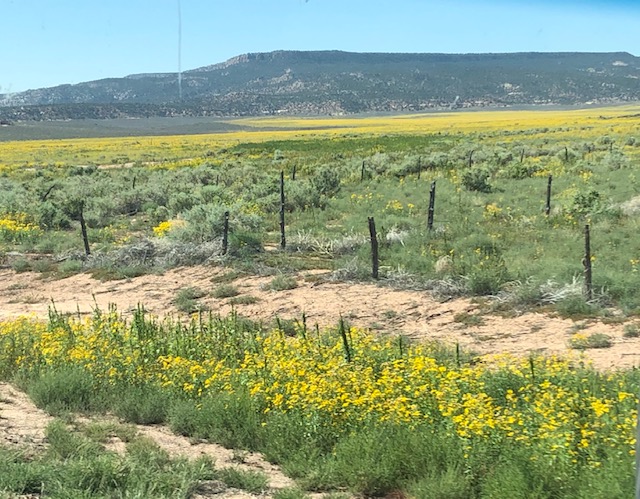 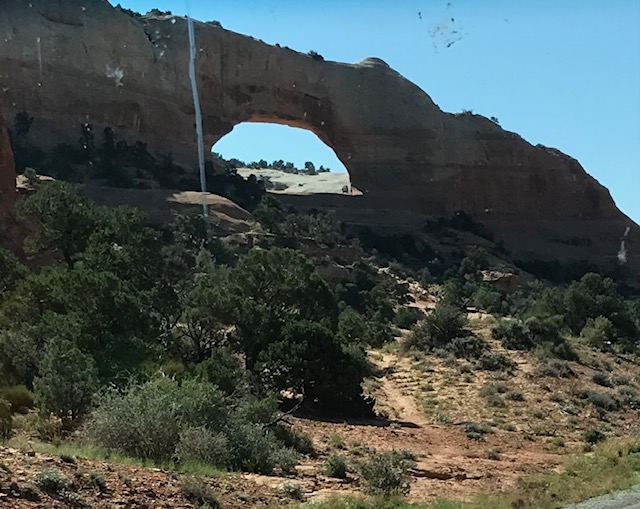 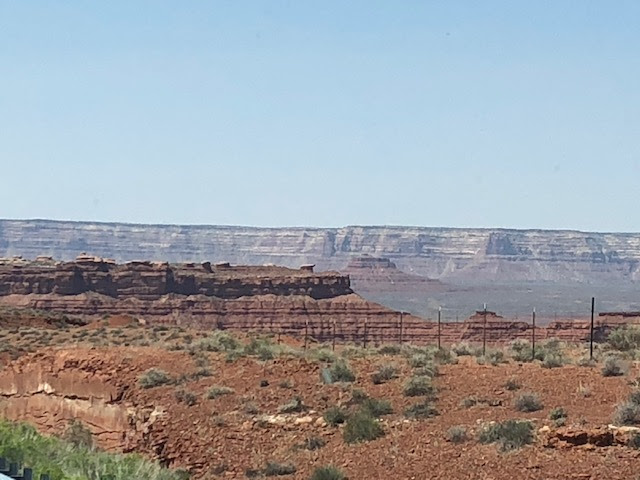 We're bummed that Amigos is closed in Kayenta and we're missing the best Navajo Tacos anywhere. Instead we opt for marginal offerings at the Burger King. I remember there's an exhibit here for the Navajo Code Talkers so it's a good spot to take a break. I take photos but they disappear from my phone (obviously very secret stuff here).
Arriving at a respectable 3:30 PM at the Cameron Trading Post, we set up in our mostly level, all dirt, water and 30 amp site. Across from the trading post and restaurant, we've stayed here before (that time the snow kept us from seeing the canyon). It's a bare-bones little park owned by the Navajo Nation, with night security and star-filled skies. The frybread tacos here are good, but they aren't Amigos :-)
Our 380 mile, Labor Day weekend, drive on Monday is a mix of two-lanes through green desert, city traffic, and familiar vistas. Although we've driven it before, I forget how much climbing and dropping there is on Hwy 17. Pretty though! The holiday hordes aren't bad through Phoenix and Tucson, but we're very happy to see our San Pedro Valley about 2 PM. And the skies are clear and blue!!!

Jeff has been great about sending us pics and keeping us informed on what's happening at the house. Still, nothing really prepares you for seeing your fireplace spread out across your living room, and large holes in the structure of your home. Our good friend Jim pointed out that you'd think it would be our home on wheels that a vehicle would drive into, not our stationary one!!

Tuesday a demo crew arrives from Tucson to haul off the fallen brick from inside the house and shore-up the damaged walls to make it safe. They brace the ceiling around the chimney in the garage, remove the damaged front door and carpet, and board up the holes to the outside. They comment several times on how the fireplace and chimney were built to survive hurricanes and earthquakes! Their trailer must have weighted 5000 lbs when they were done.

Within a couple days we have an approved claim from State Farm with checks already in the mail. Our contractor who did our kitchen in 2019 is onboard to do the rebuild for us. Friday his crew arrives to remove the rest of the chimney, the ginormous firebox, and do a temporary patch on the roof. It sounds like something I want to watch them do. Until they start and instead Jeff and I go to town to run errands :-))


It's obvious from the photos that we are incredibly fortunate in the lack of damage we sustained to personal items. Bill's recliner was tweaked and we've already replaced it. The trunk is damaged but useable against a wall. A small ottoman was crunched and we've replaced that as well. Paintings, books, pots, etc., all flew across the room from the impact, but except for a few nicks are all fine.
The one item that is devastating for me is the loss of my Bison skull, painted with the face of Chief Red Cloud. It is completely decimated.

Now we wait. Not for our contractor or permits or the insurance companies (the driver's insurance company is covering everything so they are reimbursing State Farm and paying our deductible). We're waiting for Lowe's to deliver the firebox <groan>. As of today it's a week late, hopefully coming tomorrow. Reminds me of Janna's countertops last Spring!
Bill's aunt's memorial in Fresno is the last weekend in September. With everything going on here, he drives by himself to be there to say goodbye to the youngest of the matriarchs we lost in the last few months. Stopping for the night at our friends' in Desert Center where Kevin joins him for the round trip to Fresno, and a quick visit with two of the grands in Valencia, breaks up the long drive for him. He enjoys seeing the family of course, but is very glad to be home after four days away.

We continue to get afternoon storms nearly everyday. Most go to the south of us, but we have a few days of real wet. When we returned our yard was deep in weeds from all the monsoons of the summer so getting those knocked down was a priority the first week. We're just hoping they don't come back before winter hits! 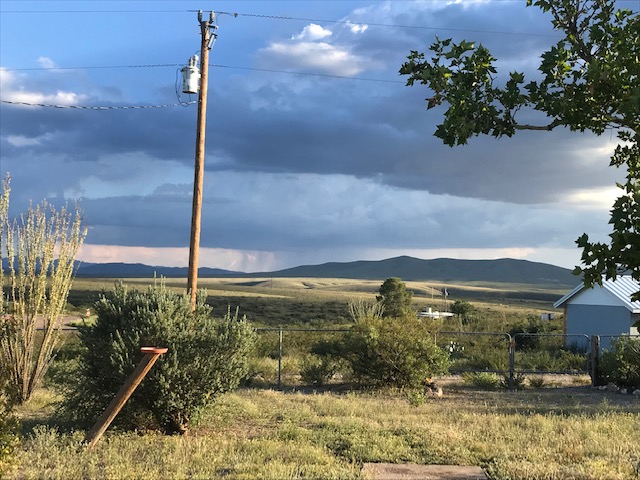 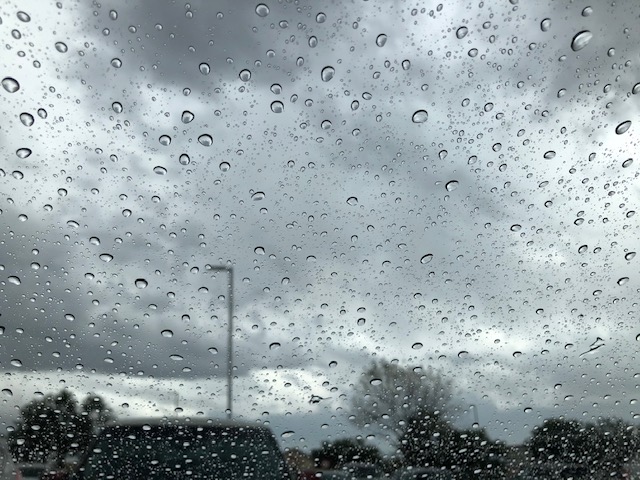 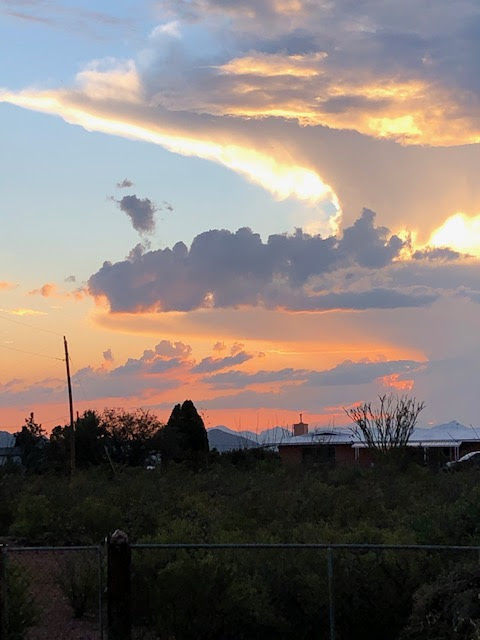 Although we can't know when the rebuild will be done (it includes all new carpet throughout the house, painting, new fencing, etc.), we're heading out the end of October for our high school reunion and a couple weeks in SoCal to see the kids and Bill's college pals on the coast. Elliott will be a year old already, and as of two days ago Penelope Anne has joined the family - our seventh grandbaby!

I'm convinced we've used up every bit of good Karma we had with how little personal property damage we had, and how quickly our insurance money got to us. When all is done we'll have several upgrades - both planned and not. Of course we'll be glad when it's all done!
In the meantime life goes on in our little corner of Southeast Arizona. 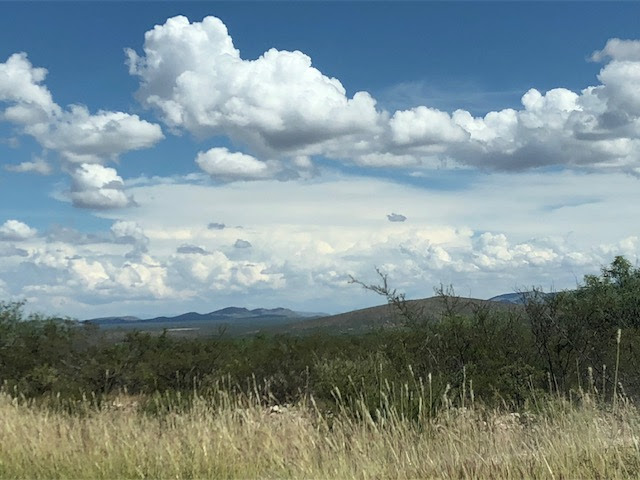