May 16-21, 2022
Dubuque, Iowa
After two days of no winds in Solon I'm again unpleasantly surprised to wake to their return on our Monday morning travel day. With just 75 miles, and heading north, it won't be that bad.
Ha!
Instead it's exhausting, with the worst side winds I've driven. Otherwise it's a lovely drive with pretty views all the way.
And then we arrive. At Dubuque County Fairgrounds. Where I'm expecting an RV park. Not a storage yard.

Kevin greets us, we're expected. The "site" has FHUs with 30 amp, and it's easy to get level. Hoping for no rain as the whole place is dirt. Apparently stock car practice is scheduled during our stay - the track is 100 yards from where we're parked :-)
I've been looking forward to this Dubuque stop, but it's not starting out how I pictured it!

Our first day I get caught up with laundry, a bit of cleaning, and a good dose of laziness. We venture out for dinner to Rhody's which has great reviews. Mediocre would be a compliment.
Back at home there's a car show in the front parking lot, and the expected stock cars are practicing on the track. The wind is back. It's all very loud.
We laugh. Every place isn't the Tetons, every day isn't October-in-New England lovely, and every meal isn't Santa Fe stuffed sopapillas.
I routed us through Dubuque so we could visit the Mississippi River Museum and Aquarium, which sounds awesome. We've been to the headwaters in Minnesota, and seen her waters run into the gulf in Louisiana, so learning more about this important body of water seems like fun!


It's worth a visit, but doesn't live up to my expectations. The animal habitats are small with no outdoor access. The river is nearby, but doesn't feel like it has any connection to the facility. Some of the exhibits are well done, while others are difficult to follow.
One of the "things" I added late to the list are the downtown murals. There are a lot of them so I figure we can start out with a few on our way home!


Dubuque is the oldest city in Iowa, and it feels very different than other places we've been in the state. Lots and lots of red brick. More diverse, little regentrification, a sense of deep history, a slower pace. 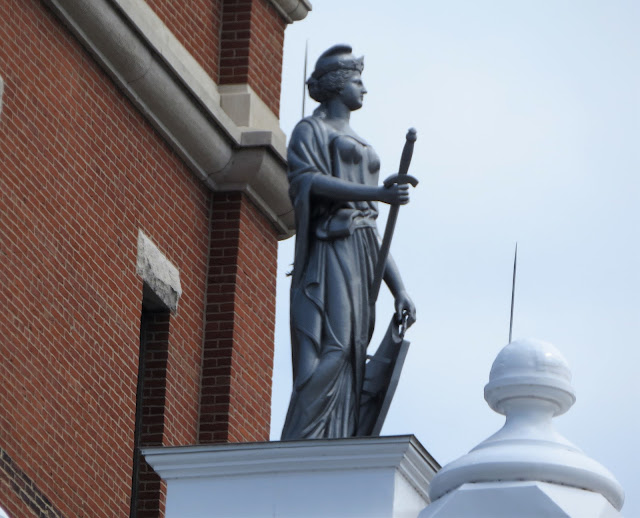 Early dinner at Catfish Charlie's is good except Bill's red beans and rice has three (!) beans in the whole bowl. At least the rice and sausage are tasty. As are the gator bites!
Back at home it's peace and quiet with no wind.
Thunder storms expected for Friday so we get out on Thursday to see what we can see.
Eagle Point Park began development in 1908 with beautiful stone and wood buildings being added in the early 1930's. It is a stunning natural space along the Mississippi River, just north of downtown Dubuque.

Mines of Spain is an historic district (one of five) of the Dubuque area. In 1796 the Governor of Spain granted 186 acres along the Mississippi to Julian Dubuque for his mining operation. Dubuque named the area in honor of the grant.


The small vertical elevator (Fenelon Place Elevator Company) is on my list, but I'm not feeling it when we get downtown. Next time.
Instead we look for the remainder of the murals, and check out the incredible architecture in this oldest city in Iowa. 88 degrees and 40% humidity makes the air conditioned Jeep a nice option for another afternoon. 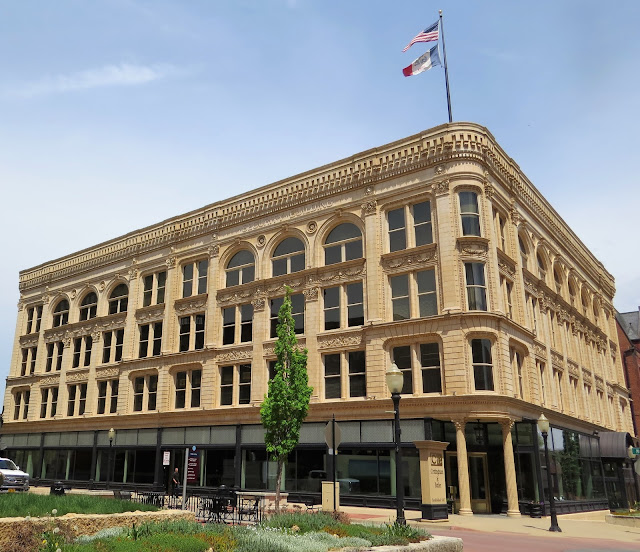 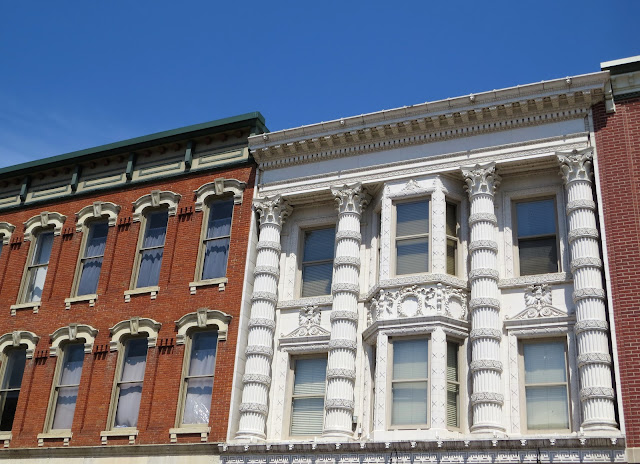 We can't find four of the murals listed in the Voices' Production information, but those we do are amazing. The size and quality are so much more than I expected. I learn later that some are rotating, and no longer here. Definitely the best collection I've seen in any city.
There's a lot, but I want to remember them all. Might be more than you want to see if they're not your thing - I'll understand if you bail :-)

Another car show with live music joins us on Friday night. Trains with loud whistles pass by below us at different times of the day and night - we love trains but the 1:30 AM one is a little annoying. Mowers and heavy equipment are in and out of the garage next door starting at 8 AM. I don't start until 9 AM.
No other people join us in the adjacent rigs so when the fairgrounds shut down at 9 PM it is very quiet and dark - so silver linings :-)))
Friday's expected thunder storm doesn't materialize so we head out to see our pal Jim's recommendation. I didn't realize the Field of Dreams site was just south of us - an unexpected adventure!
The location has a very sweet and exciting history since the 1989 (gasp!) Kevin Costner hit movie, including the MLB game played on the new adjacent field last August (7800 people attended). The dream continues on August 11 when the Cubs play the Mets here! 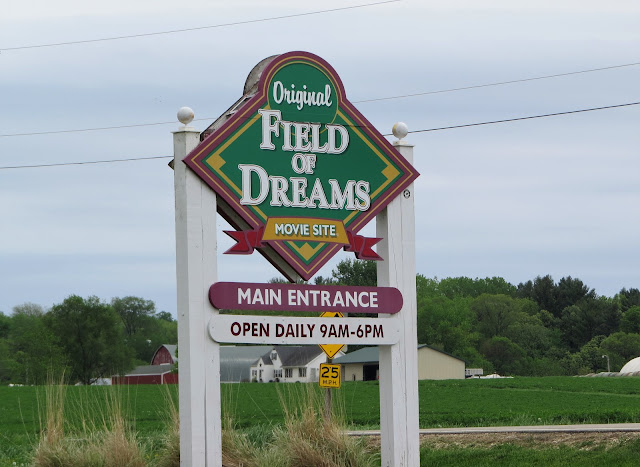 Our time in Iowa ends here as we're on to Illinois on Saturday. The longer we were in Dubuque, the more we liked it. And the "iffy" site at the fairgrounds is probably a place we'd return to - inexpensive, safe, and one of those places we'll laugh about every time we think of it :-)