Our Happy Place and a Sad Loss

June 8 - 20,2021
Garibaldi, Oregon
Ever since our first single-night stop in Tillamook, Oregon, on our first route in our first year, this area has been in our top three favorites. Especially when the temps are high elsewhere, and I'm still in pants and long sleeves! We've managed to come back every two years, and we'll continue to do so.
Harborview RV and Motel in Garibaldi (7 miles north of Tillamook) is at the port with several water-front sites. Unfortunately I wasn't able to get one this time. Although I made the reservation in November, I needed two weeks and they didn't have it. The site we got is not the one I thought it was so our views are limited. Not sure why they have a large bush blocking the front of the site where there would be water views, but we won't choose 31 again!
Our first week is a real mix of delight and sorrow, of peace and hassles. Revisiting a few places and exploring new back roads, we're delighted to be in a place that always makes us happy. Unfortunately it is also the place we learn of Bill's mom's passing. At 96, with declining health, it is not an unexpected phone call. But it's still Mom and the loss is a big one for Bill. Along with the sadness comes the arrangements that his family will make back in California, and the plans we make to get there for her memorial. Fortunately we'll have reasonable access to an airport in a couple weeks, at a time that works best for everyone else.
At the same time I'm notified that someone is using my ATM card in Texas. Sigh...... Wells Fargo opens an investigation which of course cancels my card. Which of course means updating numerous records and waiting for a new card. Good thing Jeff is at the house and is able to successfully forward it to me before we leave.

A few weeks ago a friend on Facebook mentioned the Neskowin Ghost Forest which is a cool spot along the coast where numerous tree stumps are visible at low tide. Looks unique so we plan a day to check it out. It's a bust as Neskowin is all private roads and private access and even the state park is just a couple narrow paths to the beach but with no parking to access them.
To salvage the 40 mile drive we treat ourselves to a fabulous ($100) lunch at Kyllos at the Beach. Not only is the food to-die-for, the restaurant is beautiful with ocean views from every seat. It's also next to D River, which at one time held the record as the shortest river in the world, apparently beginning a decades long dispute with the Roe River in Montana. Guiness gave the nod to the Roe in 1989, but in 2006 pulled the designation. There is no longer a record to be claimed. So much fun stuff to learn every day!
You can't stay here and not make the Three Capes Scenic Loop (Meares, Look Out and Kiwanda) - it's in the rules. We save the Cape Meares Beach for another day as a land slide closed the road many years ago that made it a loop, cutting off the pretty area closest to Tillamook from the drive. 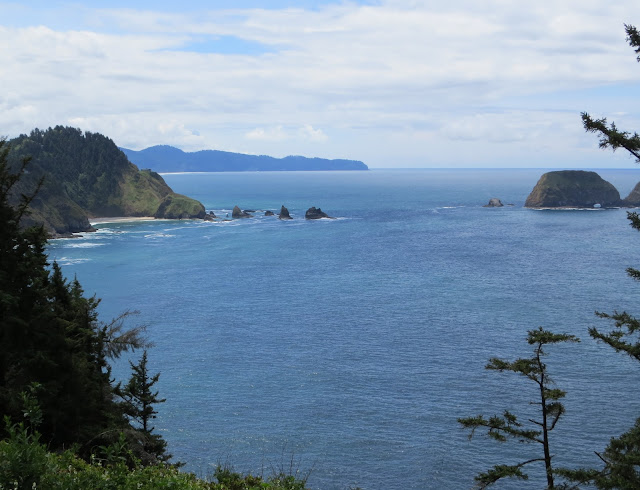 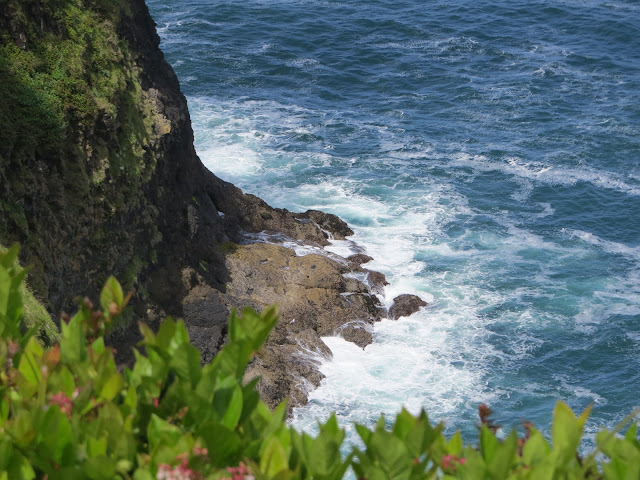 We often drive through state campgrounds to check out the sites for future visits. At Cape Lookout SP I spy a familiar rig! It's Watson's Wander. I make a quick stop to say hi to Amanda and suggest we try to get together while we're both in the same area. She and Tim have been ahead of us along the coast, and I was sure we wouldn't catch up with them. So this is a fun surprise! Amanda reaches out a few days later and we meet up at Buttercup Creamery.
Can't believe we both forgot to get a pic of our visit, but I'm glad we had the chance to get caught up!
During our two weeks we had a couple days of rain with bright sunny days in between. Some foggy mornings, and wind nearly every afternoon. Long days with dark coming well after 9 PM. One evening we're treated to the most spectacular skies - definitely gives Arizona some competition! 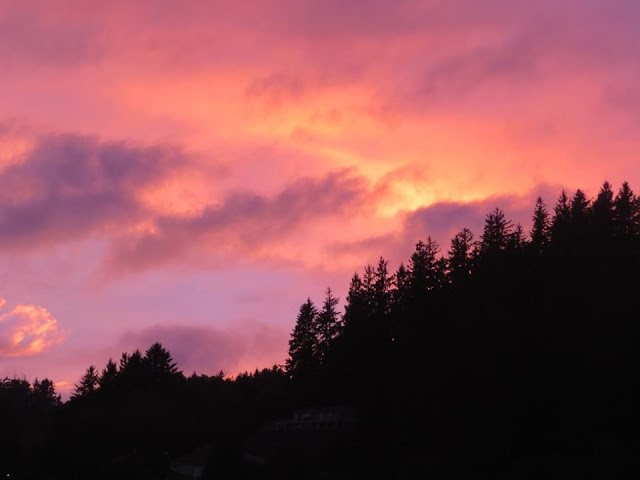 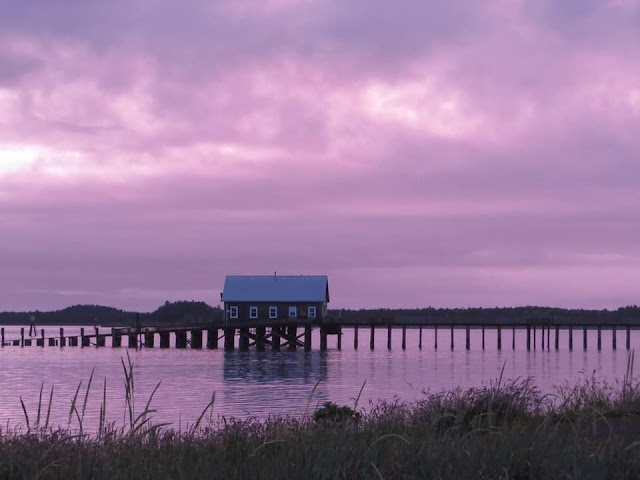 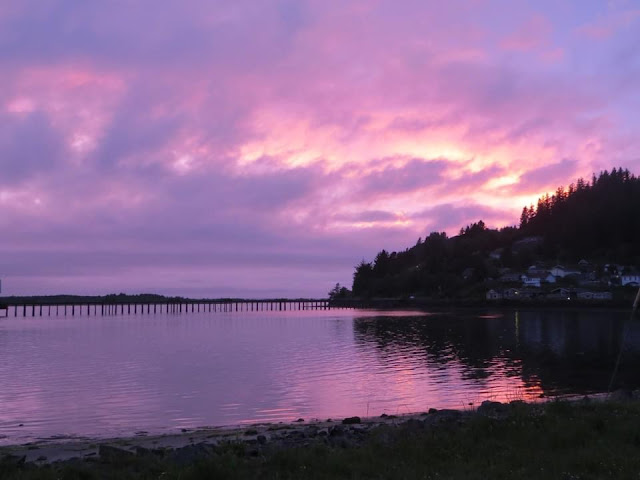 We round out our two weeks with a couple back country drives through forest and along creeks and rivers. The Tillamook Forest Center remains closed due to COVID, but plans to open in the near future. It's a must-do when in the area.
We "attempt" Coast Range Road but end up on logging roads going who-knows-where. Lots of "Y"'s with zero signs, no GPS access, and our Benchmark Map doesn't show anything, so instead of getting lost in the woods on very steep and narrow tracks we find our way back the way we came! Sometimes the road less traveled isn't a great option.

We get back to the beach at Cape Meares on our last day. While the small parking area is full, it feels like Tessa and I have it to ourselves. 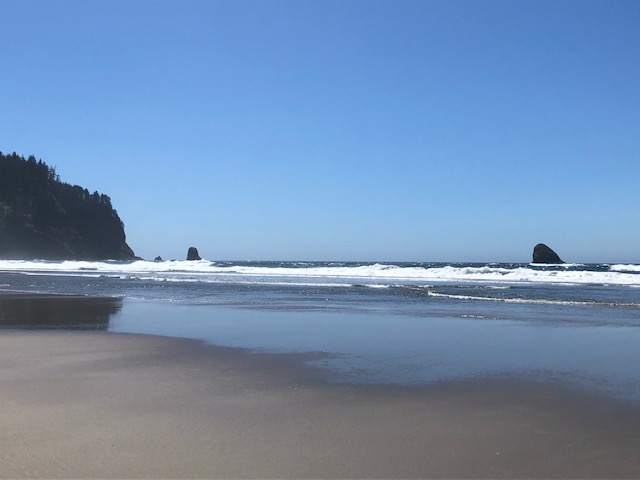 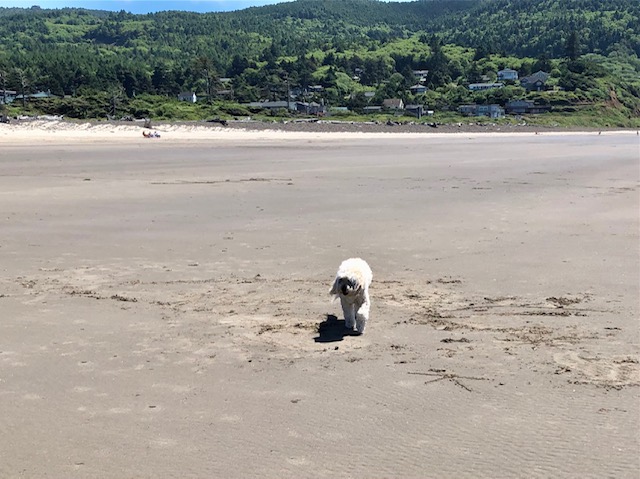 One of the best parts of this life on the road is the opportunity to see wildlife - in the wild - doing wild things. With the tide out, and no humans digging for clams and shrimp, a couple bald eagles feast on a large salmon. Well one is able to feast peacefully, while the other is harassed relentlessly by a seagull. The gull never bothers the other eagle once, but the gull dive-bombs his buddy over and over - and over! 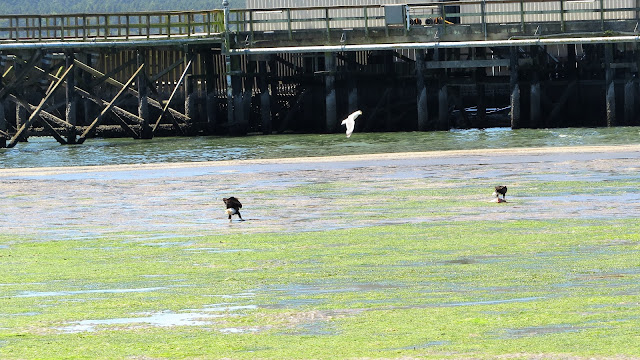 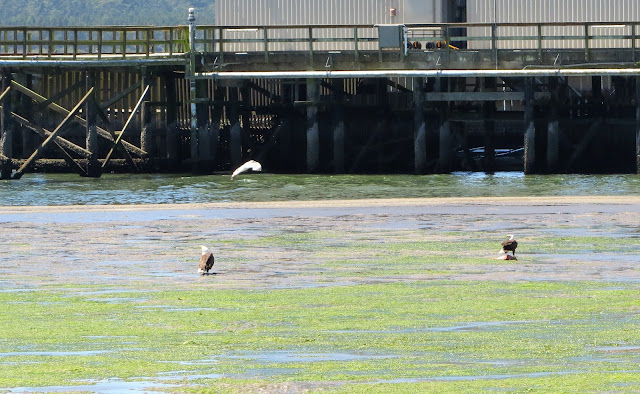 There are not a lot of decent eateries in Tillamook or Garibaldi so we're excited to find a new restaurant by the RV park. Garibaldi Portside Bistro is a comfortable place with a full bar, lovely dining room, and outdoor seating. Our service is great - we go three times :-), and the food is excellent.

Hard to believe we're already moving on after looking forward to this stop for months (and month, and months), but we have more wonderful new and familiar places to enjoy down the road. 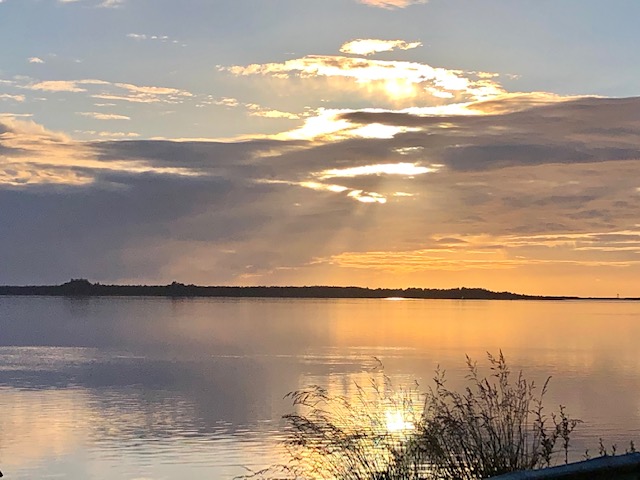