Surprise Gathering for a Best Friend and More

When everyone was making plans for the 40th high school reunion, Bill was so disappointed that one of his best friends was not able to make it.

Tom lives in Spokane and already had plans to fly to California the month after the reunion for a family event. He couldn't do both trips.  Bummer.

To make the timing even worse, Bill's company was relocating with mandatory "all-hands-on-deck" for all weekends in May. We would not even be able to see Tom during his California visit. Double bummer.

Last week things started turning around when it looked like the move was going to wrap up early. Bill let Tom know we would be over for a visit on his last night in SoCal. He also let him know we had invited another couple from high school to join us for dinner that evening. Yay.

What he didn't tell Tom was that he had also contacted a dozen other mutual friends and that all of them were meeting us for dinner. This included Kevin (to complete the "Terrible Trio") coming from Kingman, AZ. Double Yay.

Our first surprise came when we learned that Donnie and Anna were making the trip from Tombstone, AZ as well. There would be a couple more before all was done :-).

We headed out Friday morning around 9:30 and stopped for lunch in Palm Desert before making the drive up the hill to Pinyon Pines. Figured a diner named after our youngest had to be "a sign" and we were right - the food was wonderful! Bill had a patty melt with onion rings (two large rings that he had to eat with a fork), and my Reuben had real sour sauerkraut.

﻿
It was nearly 90 degrees when we left the valley floor and started up Highway 74. When we turned off the highway it was 70 degrees. Lovely weather for sitting outside and visiting with Tom and his brother Mike and the neighbors.


After a few hours we returned to Palm Desert and checked in to our hotel. Kevin and Bridgette were  there, then Eric and Stacey arrived. A quick visit at the hotel and we drove to the restaurant in Indio. This isn't just any restaurant for this group. Ciro's is where everyone from Eagle Mountain went when we were kids! Whether it was the monthly trip to "town" for groceries and appointments, or a stopping point after a club/sports event, Ciro's is a place of great memories and awesome pizza. 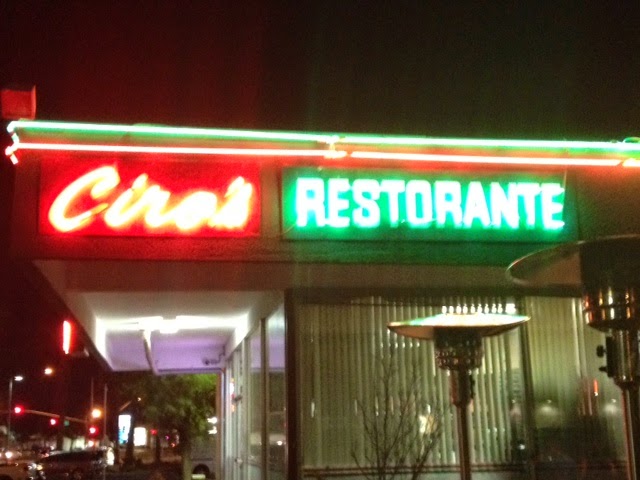 We arrived earlier than our reservations and were able to move our group out to the patio. We had it all to ourselves where we could mingle, take photos, be loud - and watch Tom's face as he saw friends he hadn't seen in years (some had been over thirty years). It was the perfect venue for this wonderful evening with dear friends.

﻿
Tom wasn't the only one surprised. The Palladine brothers showed up.  Bill and I drove with Mark and his date to prom in 1973 and I hadn't seen him or his brother in 40 years!  Harold Copeland was at the reunion last month and he stopped by for short visit as well.  Love it!

In 1976 Mike took the original Terrible Trio photo at the house in Pinyon Pines. It was re-created in 2004, with a copy of the original in Bill's hand. Naturally this "reunion" called for a re-re-creation, and Bill had the first two copies in hand to continue the tradition. You can't see the first two photos well in this one, but let's just say they all look "somewhat" different nearly 40 years later :-). It was great to see them together and Kevin's drive from Kingman to make it happen was really special.


Since Donnie and Anna made the trek from Tombstone they made plans to stay the weekend at Jim and Maggie's (we all like each other a lot). Still more high school friends who couldn't make it to Palm Desert were joining them in Lake Elsinore for a Saturday afternoon BBQ.  It was (close enough) on our way home so Saturday morning we headed that direction when we left the hotel.

Bill hadn't been to Idylwild in over forty years and I love the little forest-town, so we took the mountain route and stopped there for lunch. Highway 74 is one of those roads that take you from the hot, dry, brown, rocky desert basin to the cool green meadows and pine forests in just a few miles. It was like changing planets rather than elevations.

Oh yeah, Memorial Day weekend! Families, bikers, GMO-protesters, dogs of every make and model, live music........it was a loud and colorful convergence on a sunny May afternoon. There are several good places to eat among all the little shops, and my favorite is the GastroGnome.


﻿
Although the interior is beautiful with old wood and wood burning fire places and stained glass windows, the patio had the added bonus of all the holiday activity to keep us entertained. Our lunch was excellent (corned beef sandwich and a shrimp louie salad).


﻿
We stopped in a couple shops then ended our visit with some decadent sweet treats. I should have taken a picture of the frozen cheesecake dipped in chocolate and almonds........because we can never ever have another one. Ever.

The drive down the back of the mountain took us through Hemet to the Temecula Valley. Before moving in with Bill in 2009 I lived there for nine years so we drove past the old house. New owners are taking good care of it. Somehow that matters :-).

Jim and Maggie are great hosts and we enjoyed another fun gathering of friends and good food.

﻿ Before leaving we had made plans to get together again in September. Already looking forward to that!