We are both dog lovers and have been blessed to have several wonderful pals in our individual lives.  When Bill and I reconnected in 2008 we each had old dogs who we adored.  Over the last five years we have lost each of them and in November of 2012 found ourselves sadly "dogless".  Not fans of tiny dogs, we were still ready for smaller than the big shepherds who had been members of our families for decades.  As we were already talking about life in an rv, we also liked the idea of non-shedding, or at least "less shedding" dogs.  There are several breeds that met our criteria but I was especially drawn to Labradoodles and Soft-Coated Wheaton Terriers.  While puppies are wonderful and don't come with the baggage of their previous lives, neither of us wanted to buy a puppy when there are so many homeless dogs out there.  My shepherds were rescues and I never regretted bringing them home.  So the search began.

You just don't find Wheatons in rescues but there are several wonderful "oodle" rescues out there and I started checking daily for a new doggie to join our family.  A friend reminded me that Craigslist also has a dog listing so I started checking there as well.  Close to Thanksgiving there was a 2 year-old labradoodle listed about 50 miles away.  Contact with the owner revealed a family who had to relocate to a home that didn't allow dogs.  They were heartbroken to give her up but wanted to actively find a new home for her rather than take the chance with a rescue.  I was still working and although we tried a couple times, we couldn't coordinate a time to meet.  During this time other people were making arrangements to see the dog and every time they didn't show up.  Two days after the owner's "final day" he got in contact to see if I was still interested.  I didn't hesitate.  My son and I jumped in the car with a leash and blanket and drove the fifty miles.

Matted coat and sad eyes, with a rope for a leash, we met her.  She was scared at first and whined most of the return trip, but when we got home she was more relaxed and started checking out her new digs.  After a trip to the groomer she had her vet checkup where she got a clean bill of health, confirmation that she is about two years old, and speculation from the vet that Tessa is more likely Wheaton than doodle.  Too funny!

With few exceptions like an affinity to spread the bathroom trash all over the floor and a couple food snags from the table she has turned out to be the perfect dog. 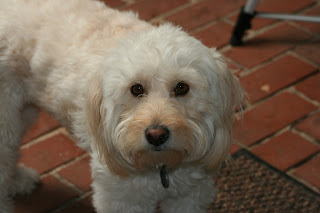 I've never had a dog that really "cuddles".  I mean she puts her paws around you and hugs.  She will lie in your lap for hours or race around the house like a dervish - depending on her (and your) mood.
She has not always been "welcoming" to others entering the house and we had some concerns about everyone being here last weekend.  We had nothing to worry about.  She just seemed to know that everyone was family and special to us.  She loved every single one of them.  I kept telling Bill that when she was gone Monday morning we wouldn't know where she went because every one was saying they were taking her home!
So that's our fluffy dog Tessa.  I believe it is no accident that those other people didn't go meet her back in November; that her previous owner kept my number.  She was supposed to be with us and we are blessed to have her in our family.
I can't wait for her to be a part of our travels!﻿
﻿
Posted by Jodee Gravel at 12:32 PM