How Could We? How Did They? 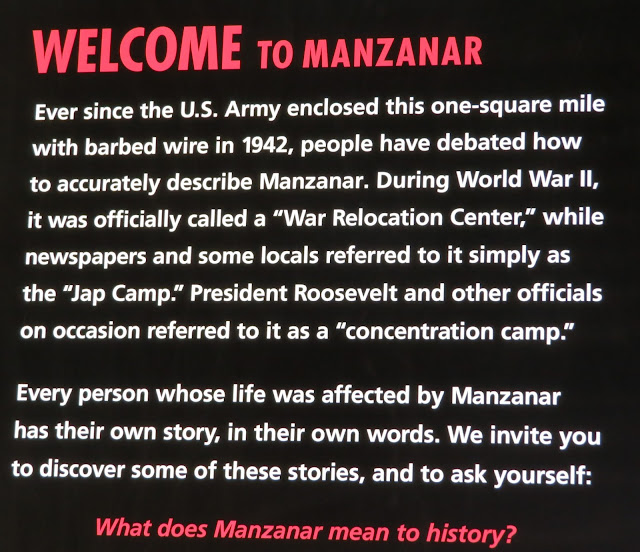 Advanced, powerful, educated, progressive - America is all these things and more in 1942. So how could we do this to our own citizens? How could we ignore the Constitution, having spent the last nearly two hundred years holding it up to other countries as how they should govern? How could we?

Fear, bigotry, political pressure, lack of experience - the exhibits at the Manzanar Historical Site do an excellent job of presenting facts and information about this shameful piece of our history, without making excuses, without placing blame, without hiding responsibility.

Japanese-American citizens, many born here, were rounded up by FBI agents and soldiers with rifles and "relocated" to one of ten centers. With only what they could carry, their lives were changed forever.

While not the concentration camps of Nazi Germany, this was not summer camp either. Guns in eight towers were pointed in, not out. Fences of barbed wire, not white pickets, surrounded the center. Families were kept together, but in tight single-room-barracks (some relocation centers used painted horse stalls), not in homes with privacy and insulation.

One major "uprising" in December 1942 was the result of a dispute between two factions of internees. Over 3000 marched on the administration center to protest the jailing of one of their leaders. Tear gas was fired into the crowd and ultimately gun shots killed one 17 year-old man and an older man died later in the hospital. This was not an attempt to escape.

In fact, there is no record of any attempted escape from Manzanar.

Instead, they made the best of a really bad situation, and that is what I found most compelling about Manzanar. How did they survive the loss of their freedom, the betrayal of their country, the theft of their way of life? How did they?

Photos and recordings tell a story of sadness and regret, but also of creativity and having fun, of being productive, and even of being patriotic.

Manzanar is a desert - hot, cold, windy, barren. In the 20 minute film is a brief glimpse at the gardens that were built and planted and maintained and loved here. Of all I saw, this touched me the most. To make something so enchanting in such a harsh place, sings of the spirit of these people. 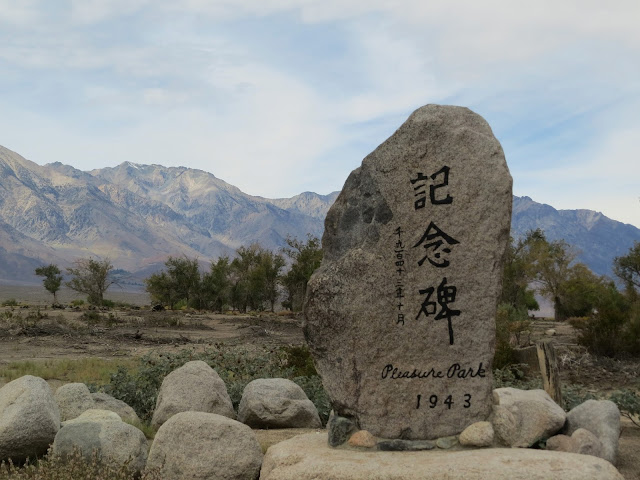 We visited Manzanar with Dave and Sue, and John and Pam, adding intelligent conversation to the experience.  It is a sobering place, and I will visit again.