Movie History Under a Majestic Mountain


Boulder Creek RV Park is the only one in Lone Pine, and has everything we need. Including Dave and Sue, and John and Pam :-) It also has the first completely level site we've had in over 30 stops. Sweet.

We spend a lazy afternoon then head to town for dinner with our new friends. Unfortunately Eric and Laurel beg off after a very busy day, so the rest of us get caught up on our individual adventures since we last connected in Carson City. We do so enjoy them!

I sleep in until almost 9 AM on Thursday, and a couple hours later suggest we try the local (and highly recommended by Pam) cafe for brunch.

Just as wonderful as described - both the food and the people. Guy in cowboy hat and boots sits at the counter finishing his breakfast. Pays for his meal and chats with the waitresses for a bit. They go back to the kitchen and a couple and their toddler enter the cafe. The cowboy greets them, brings them a couple menus, points out the specials, and leaves. A while later he returns with some aluminum pans for the kitchen, says good-bye to the youngster again (who lights up and waves), and is gone once more. Gotta love small towns.

Although I'm anxious to see the amazing Alabama Hills, I think that seeing the small movie museum first will make the location even better. Hundreds of movies - mostly B Westerns from the late 20's through the early 50's - have been filmed in these hills. I know we can pick up a small map that takes drivers to the location of several specific filming spots. Gotta do that!

The Lone Pine Film History Museum is a small building with a large collection of memorabilia. Separate exhibits for some of the bigger names - Tom Mix, Randolph Scott, Roy Rogers and Dale Evans, Lone Ranger, Audie Murphy - are surrounded by dozens of more obscure movie posters few have likely ever heard of. We watch the 15 minute movie covering the long and interesting history from silent films (what's with the heavy make-up on those cowboys?) to Iron Man (Robert Downey Jr. without mascara).

The area is well known for the westerns filmed here. Entire towns, stage stops, ranches, and Indian villages were built and then taken down over the years. Even today it doesn't take much imagination to imagine The Duke riding a giant horse across the range, or Gene Autry singing with a posse' around a campfire.

But what I find most interesting is the number of non-westerns that used the area for live sets. The older Gunga Din is probably the most well known, but Tremors, Star Trek, Iron Man, Bad Day at Black Rock, Samson and Dalila, and dozens more were all made here as well. 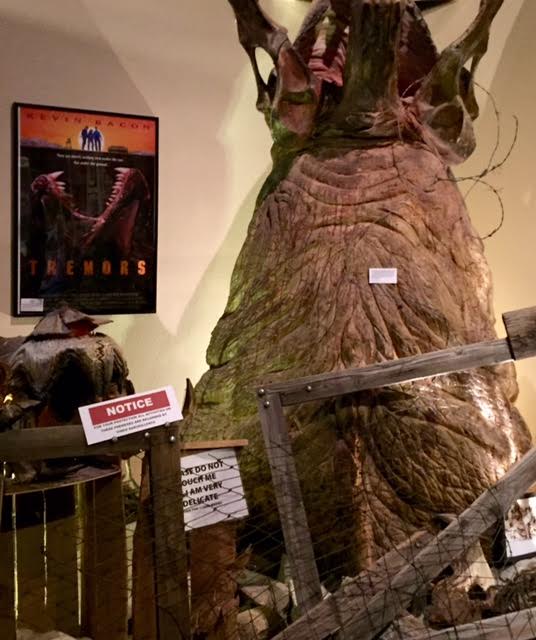 Very few references to the women of all these movies. The exceptions are the exhibit for Roy Rogers and Dale Evans, and the small shadow box for one of the first stunt women - Polly Burson.

As a young girl I loved Barbara Stanwyk, Lee Remick, and Maureen O'Hara, who all portrayed strong women in the movies referenced here.
After the museum it was off to the place in real time! With the movie location map in hand, complete with GPS coordinates, we take Movie Road (of course) north to the Gunga Din site.  At each site Bill is able to line up the exact location from approximately the same place as the scene was shot.


It is a fun way to start exploring this beautiful and unique area. The brown, round boulders are such a contrast to the blue, sheer points of the Sierras to the west. Mt Whitney keeps watch over all us tiny mortals playing in the rocks.

Climbed a few hills into the boulders, followed a few dirt roads, found one arch, and want to come back to see more before we leave.

Drive up Whitney Portal Road to the pavement's end, but not "feeling" the dirt shelf road to the top, so we head back to town. We still have a week to try it again, and Sue did say there's more fish up there :-)